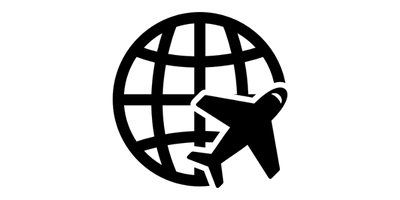 NeuralTools Assists Airline to Determine the Most Profitable Price Points

Fernando Hernández, a Senior Risk Consultant and Trainer at Palisade, was tasked with developing a model for predicting demand and price elasticity for a domestic airline catering to the tourism industry in Costa Rica. This predicting model uses neural networks technology powered by Palisade’s NeuralTools application. NeuralTools is a sophisticated data mining application that uses neural networks in Microsoft Excel. New predictions are based on the patterns of the known data. It imitates brain functions in order to “learn” the structure of your data. Once the trained network understands the data, it can take new inputs and make intelligent predictions.

The airline conducted 74 daily flights over 17 routes, utilizing eight planes, and with access to a historical dataset of 143,000 ticket records, Hernández was able to set a baseline of information to develop an accurate prediction set on prices and occupancies. This database contained information on flights, routes, customer categories, dates, fares and aircraft capacity.

Since this particular airline depends heavily on American tourism, it was also important to consider the nature of the dates of flights, based on when Americans might be more likely to fly with the airline. Such categories included day of the week, month, holidays, typical vacation periods, etc.

The objective of the trained network created by NeuralTools was to adequately predict how many passengers would purchase tickets on a particular flight and the optimum price point based on a wide range of condition combinations. Once the dataset was created, the neural network was set to be trained and tested. In total, 80 percent of the records were used to train the network and 20 percent were designated to test the validity of the findings.

After training and testing, a sensitivity analysis on 21 variables was performed, and the network was ready to begin calculating predictions for passenger demand for a particular flight. The sensitivity analysis showed which factors held the greatest weight in determining the number of passengers per flight: 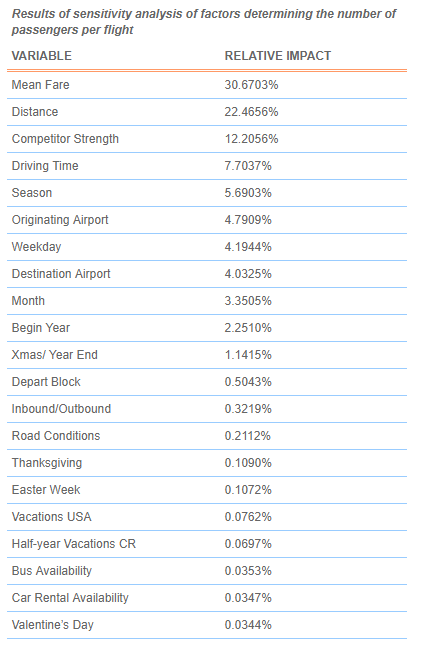 Once the factors contributing to flight occupancy were determined, Hernández could put that data to work in the prediction phase. A 30-day model for a single route was created that calculated all 21 independent variables for this time frame, some of which were route-related and date-dependent. 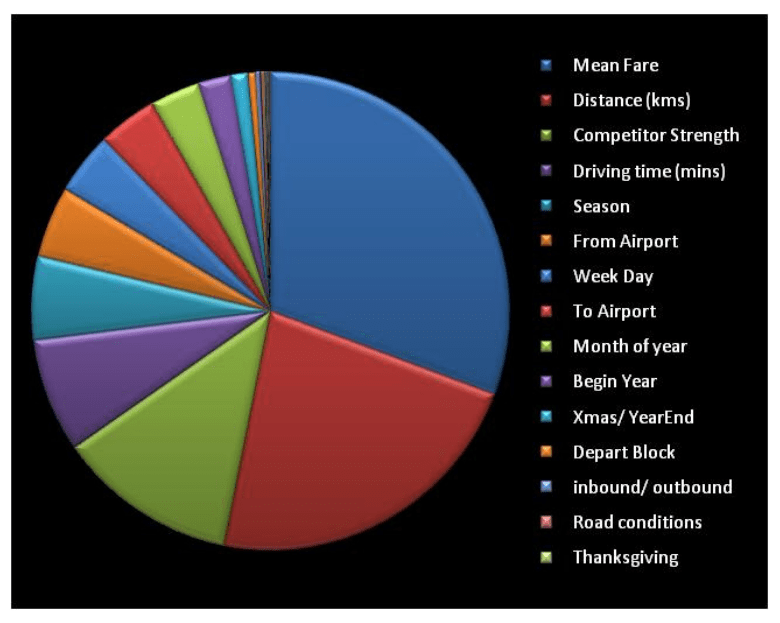 Another view of the factors determining the number of passengers per flight.

Depending on the calendar, the model would “know” whether this time frame included holidays, certain seasons and other date-related features. With all independent variables calculated, the neural network predicted passenger levels based on fares, creating a price sensitivity prediction of the flight.

For example, see the following chart that shows both a prediction for passengers and revenue for a specific flight:

A data entry table was created utilizing fare increments of $5.17, starting at $50, and all the way up to $200. The model predicted that occupancy would remain more or less steady—between 17 to 23 passengers— regardless of the fare, until the $175 threshold is reached. Once this mean fare was surpassed, passenger demand abruptly decreased driving down total expected revenue for the route. At a mean fare of above $185—a mere increase of $10 per ticket—occupancy dipped to less than five passengers.

Based on the model, it was clear that the mean fare that maximizes revenue edges around $174, pushing flight revenue to $3,848 with an average of 22 passengers, under the specific conditions of that flight’s route and date. NeuralTools was also helpful in sensitizing passenger predictions under certain marketing strategies around dates and routes.

While demand and price elasticity is not an exact science, NeuralTools helped the airline by utilizing data it already had to determine the most profitable price point and adjust it based on the numerous factors that impact air travel.